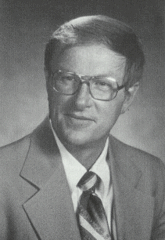 Gordy graduated from Cameron High School where he lettered in football, basketball and baseball. At UW-Eau Claire he played football.

He was an assistant coach of the North Squad in the first Shrine All-Star game in 1977. The North and South played to a 6-6 tie. Besides coaching football, Gordy also coached golf and basketball at Antigo. He is a member of the Langlade County Ski Club and on the Peace Lutheran Church Board of Education.