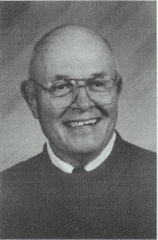 Don graduated from Peoria Central High School in 1951. He lettered in four sports (football, basketball, baseball and track). He was captain of the football and baseball teams his senior year. At Bradley University he played four years of football, two years of baseball and was on the track team for two years. He graduated from Bradley after serving two years in the Army.

While in the Army Don played football, coached basketball, softball and baseball.

In 1957, he coached in the Peoria school system. From 1959 to 1961, Don coached at Lockport Central High School. He then moved to Lockport West where he coached for two years. From 1964 to 1968, he coached Joliet West to a 34-6 record and two undefeated seasons. In 1969 Don took a job at Webster High School as Principal and Football Coach where he stayed until 1977. He then left the area for 8 years while he worked in Arizona.

He returned to Webster in 1985 as Assistant Principal and Football Coach. In 1987 his football team won the Division VI State Football Championship. He was Region III Coach of the Year in 1986 and 1987. In 1991, the Webster Athletic Field was dedicated to Don Seitzberg in honor of his many years of successful coaching and dedication to the lives of young athletes. During his career Don also coached swimming, basketball and baseball. He served 11 years as Athletic Director.

He was a member of the Association of Wisconsin School Administrators, the National Association of Secondary School Principals, the Wisconsin High School Football Coaches Association, the Lion's Club and Chairman of his Church Council.