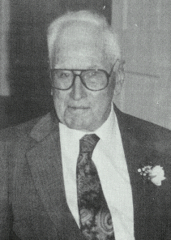 Fran began his teaching and coaching career at Arena Union Free High School in 1936. He was hired as principal, teacher and coach. He moved to Blanchardville in 1939, where he taught and coached football, basketball and baseball until 1943.

From February of 1943, until November of 1945, Fran served in the U.S. Navy. After the war he started teaching and coaching at Sun Prairie High School, where he stayed until his retirement in 1976.

During his career Fran coached four different sports for a total of 112 seasons. His football record before retirement was 195 wins, 70 losses, 4 ties and 14 championships. His basketball teams at Sun Prairie won 311 games and 9 championships. His track teams won 3 championships. He also coached baseball and served as athletic director for many years.

This is an outstanding accomplishment and it is only fitting that "Fran" Sheehan be honored with this Gold Service Award.

"57 Years of Coaching Football in Wisconsin"