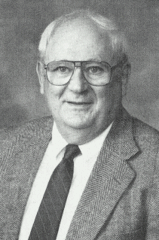 Leo started his coaching career at Wilton High School in 1952. He returned to his hometown of Beaman, Iowa in 1955. At Beaman his football team lost only four games in four years, winning 30 games and two championships. In 1958, his track team won the State Class C Indoor Championship. He moved to West Delaware County Community High School, Manchester, Iowa in 1959, where he coached until 1963. While at Delaware Leo served as a member of the Iowa High School Athletic Association's Football Rules Advisory Committee for three years before moving to Wisconsin. Leo was Head Football Coach at Middleton High School from 1963 through 1974. His teams won 61 games, lost 35 and tied 5. They won the Badger Conference Championship 7 times. He was also Head Track Coach at Middleton from 1963 through 1970, and Assistant Basketball Coach from 1965-70.

During his career, Leo has also coached girls’ basketball, baseball and served as Athletic Director for 8 years.

He is a veteran of the Armed Forces where he served in Korea during the Occupation.

Leo has been a member of the MEA, WEAC and the NEA since 1963. He is a Charter Member of the SERTOMA Club of Middleton and was a member for 25 years. He is also a member of the VFW. He was honored as the Wisconsin State Journal Coach of the Year. He received a Wisconsin Basketball Coaches Association Appreciation Plaque in 1990. Governor Tommy Thompson honored Leo for "Athletic Leadership" after serving as the Middleton Regional Director for the 1990 Badger State Games. Leo retired from Middleton in 1990. He was elected to the Board of Education in April of 1991.