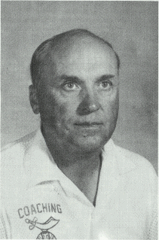 Duane graduated from Auburndale High School where he lettered in football, basketball and baseball. He went on to UW-River Falls and lettered for four years in baseball.

He served two years in the U.S. Army with the 11th Airbourne Division in Munich, Germany.

Duane started his coaching career as an assistant coach at Owen-Withee in 1959. He moved on to Colby in 1962 where he coached football for 28 years. He retired after the 1991 season. During that span, Duane's teams won 10 conference championships and had a 32 game win streak from 1973 into 1975. In 1974 his team was voted number 1 in Class B. His 1985 squad played in the state championship game in Madison.

Duane has received numerous awards as District and Conference Coach of the Year. Duane was selected to coach the North squad in the 1992 Shrine Bowl Game. The North won that game 28-27. Besides football, Duane started the wrestling program at Colby and coached that sport from 1962 to 1968. He was track coach from 1964 until 1969. And he coached 7th and 8th grade basketball for 18 years. Duane served as Athletic Director at Colby for 27 years.

He retired from teaching and coaching after the 1990-91 school year.