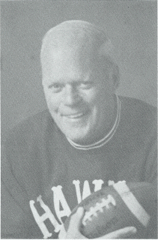 Paul graduated from St. Catherine's High School, Racine, Wisconsin in 1954. He graduated from University of North Dakota in 1963, where he participated in football.

He was a member of the United States Service for 2 years.

He started his coaching career in Hilbert, Wisconsin where he coached football, basketball and track. In 1964 Paul moved to Prairie du Chien where he became football coach for 27 years. His teams compiled an overall record of 168 wins, 73 losses and 1 tie. His teams had 14 Conference Championships, 7 Play-Off Appearances with 3 State Runner-Up Teams in 1978, 1985 and 1988.

Paul was selected as the "Coulee Region High School Football Coach of the Year" in 1988. He was an assistant coach of the South All-Star Shrine Team in 1987. Paul was also Head Wrestling Coach for 7 years in Prairie du Chien, as well as assistant track coach for 11 years.