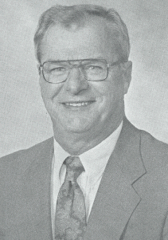 Wisconsin for two years; and

John graduated from Sauk City High School where he lettered in football, basketball and baseball. At the University of Wisconsin, John played baseball and freshmen football. After graduation from college he was commissioned in the Army Signal Corps. He served two years of active duty and 4 years as a civilian with the National Security Agency, before entering the coaching field.

John took a teaching and coaching position at Wisconsin High School under Hal Metzer, WHSF-CA Hall of Fame member. He became Head Coach of Wisconsin High in 1963. The school closed in 1964. He was the Football Coach, Volleyball Coach and Athletic Director. His football teams recorded 6 wins, 9 losses and 2 ties in the tough Badger Conference. In 1964 he moved to Belleville High School and was their football coach for 28 years. Competing in the State Line Conference, his teams won 6 conference championships and had three undefeated seasons. One team participated in the play-offs.

Other coaching duties included assisting in basketball and baseball. John has been a member of BEA, WEA, NEA, and the WHSFCA. He serves his community as a member of the Belleville Community Club.