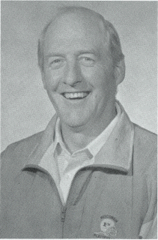 George was a teacher and coach in the State of Wisconsin for over 30 years, and was Head Football Coach at the UW-Platteville since 1979.

He attended St. Raphael and Blessed Sacrament grade schools in Madison and graduated from Madison Edgewood High School. George graduated from the University of Wisconsin with a Bachelor of Science degree in Physical Education and a Master's Degree in Educational Administration. He lettered as a center and linebacker on Coach Milt Bruhn's 1957-1958 football teams. Following a two-year overseas tour in the Army, George returned to Edgewood in 1962 to teach social studies/physical education and coach football and basketball. He was named Athletic Director in 1966. George compiled an overall record as head coach of 43-10 in six years of football and 138-47 in eight years in basketball.

George returned to his college alma mater as an assistant football coach on John Jardine's staff from 1972 until 1977. After spending the following year as an administrative assistant to Head Coach Dave McClain, he accepted the head football position at UW - Platteville in 1979. While at Platteville, George's teams posted a 79-60-2 record, claiming a share of the Wisconsin State University Conference Championship in 1980. His 1992 squad finished with a 5-4 season, the Pioneers' seventh straight winning season. Additionally, George served as Athletic Director from 1981 until 1990, and included among his achievements the development of UW-Platteville as the summer training camp for the NFL's Chicago Bears since 1984.

He was active in regional and national coaching associations and was a past member of the NCAA Football Rules Committee. George included among his numerous honors the Edgewood High School Dominican Award for service to humanity and the Wisconsin Independent Schools Athletic Association's Man of the Year Award. George was strong in his Catholic faith and was regularly involved in church-related activities, most recently as President of the Southwest SERRA Club.