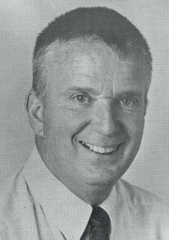 Mike graduated from Alton, Illinois High School. At Alton he was an outstanding athlete in baseball. Mike was All State in baseball in 1951 and participated in the Baltimore Orioles professional baseball system in 1953 and 1954. He entered the University of Illinois in 1954 and played on their baseball team staying on as an assistant coach after graduation in 1958.

Mike was named WSUC coach of the year in 1975, 1979 and 1985. He was also named Coach of the Year by the NAJA District 14 in 1975. The American Football Coaches Association named him their Coach of the Year for District 6 in 1979 and 1985. In 1986 he received the Teacher of the Year Award presented by the College of Education, UW-River Falls. Mike also was named the recipient of the Dave McClain Service Award in 1989. He also was inducted into the UW-River Falls Hall of Fame in 1989 as well as the NAJA District 14 Hall of Fame in 1990.

Mike was the featured speaker at one hundred-plus banquets and clinics, including the Shrine All-Star Banquet, WHSFCA All-State Banquet, WHSFCA Hall of Fame Banquet and Coach of the Year Football Clinic. He originated and directed the football camps at UW-River Falls beginning in 1971. Several camps were featured in Sports Illustrated, ABC-TV's "Wide World of Sports" program and the TV Guide. Camp attendance varied from 600 to 1, 100 players. The good will the camps provided for the UW-River Falls, as well as serving as a recruiting tool, is second to none. Mike produced winning teams at all four coaching situations taking three different league "doormats" and building them into championship programs.

He was not interested in the Division 1 level of coaching with its emphasis on entertainment. His desire was to teach young men how to "try!" He was the coach who instilled within his student athletes the desire to "try," giving them something of a lasting value. Mike challenged his players to learn what "try" really means. They had to learn to overcome adversity and learn to improve themselves to the maximum. He constantly instructed his players to welcome all challenges, thereby learning if they would truly "try" as an individual; then the team would always succeed.