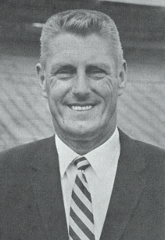 Elroy played at Wausau East High School for legendary coach Win Brockmeyer, earning all state honors in football and basketball. He entered University of Wisconsin in 1942. In 1942 this triple threat halfback helped the Badgers to a 8-1-1 record, 2nd in the Big 10 and 3rd nationally.

In 1943 he went to Michigan with the Marine Corps V-12 unit. He played on Michigan's championship team and earned letters in football, basketball, baseball, and track.

Elroy became a professional in 1945 with the Chicago Rockets and later with the Los Angeles Rams. In 1951 he gained 1,495 yards in receptions, an all time record. The same season he caught 17 TD passes to tie Don Hutson's league record. He caught TD passes in 11 consecutive games. He caught 343 passes for 6.299 yards and 53 TD's over nine seasons with the Rams. He retired from playing in 1957.

He was General Manager and Assistant to the President of the Rams until corning home to Wisconsin as Athletic Director in 1969. He also enjoyed a career as a movie and TV star in the 1950's. The story of his life "Crazylegs" was filmed in 1953 and "Unchained" was filmed in 1955. When he returned to Wisconsin in 1969 they were averaging 43,559 per game in attendance; by 1971 they were averaging 68.131 in attendance and rose to 13th nationally in 1984 averaging 74,794 per game. Wisconsin hockey teams have led the nation in attendance for 17 consecutive years. Elroy is one of the most recognized and respected members of the American athletic community.

1943-44-The only athlete in University of Michigan's history to win four letters in four sports (football. basketball. track. baseball) in a single year

1965-Inducted into the Wisconsin Athletes' Hall of Fame

1968-Inducted into the NFL Hall of Fame

1984-Inducted into the Michigan Athletes' Hall of Honor

Upon Elroy's retirement, a street in front of the field house and Camp Randall was renamed "Crazylegs" Lane.