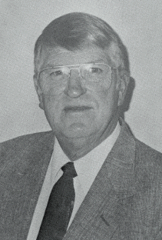 Rod Lundberg for the past 38 years has served in one capacity or another as a coach, teacher, administrator or official at Hayward High School. Enough was thought of his service for the school and community to name the athletic field (Rod Lundberg Field) in his honor. Rod has spent 38 years in education at Hayward High School. Thirty-four years were spent teaching physical education and thirty-two years as Athletic Director. He also spent 26 years as the head football coach, winning the championship in 1974, and had one undefeated season.

Rod was inducted into the UW-Superior Hall of Fame in 1981, and in 1980 he was elected the Wisconsin Athletic Director of the Year. In 1993 he received the NlAAA National Merit Award. Rod also was selected Hayward citizen of the year in 1990. Rod graduated from Superior Central in 1950 where he participated in all sports and was elected to the North Football Squad in 1950. Rod retired in 1990 from teaching but presently remains as Athletic Director of Hayward High School.

Rod has served as a church officer since 1963 and is former chairman of the Hayward Cancer Society. He has served as an American Birkebeiner Race official for 22 years and has been Chief of Competition at the World Lumberjack Championship for 34 years. According to local legend he has been in charge of the Muskie Festival and Fourth of July "Kids" games forever. He also belongs to the Lions Club and has served as the Church Financial Secretary for 32 years.

"Coaching has brought me great satisfaction by being a part in guiding the young athletes as they grew into disciplined football players and went on to higher education, many becoming successful teachers, coaches, athletic directors, doctors and community leaders. These are my great rewards of coaching."