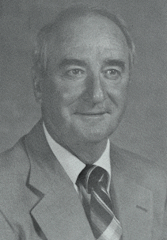 Jim graduated from Hazel Green High School where he lettered four years in football and basketball. He went on to UW-Platteville where he played baseball. After graduating from Platteville he spent two years in the service playing baseball with the 41st Armored Division in Germany. In 1954 he started his teaching and coaching and coaching career at Benton High School where he remained for 18 years. He coached 6-man, 8-man and 11-man football. Jim introduced 8-man and 11-man football to the school. While at Benton his football teams had a record of 93 wins, 48 losses and 4 ties. They won the conference championship four times and finished 2nd five times. This included 3 undefeated seasons.

He moved to Southwestern High School, Hazel Green, Wisconsin in 1972 as a high school social studies teacher, varsity basketball coach and assistant football coach. He was an assistant football coach for five years. In 1987 he was appointed interim varsity coach for one year. Professional organizations Jim has belonged to are the WEA, NEA, WHSCA, WADA, NADA, WBCA, AFT, SWEA, and the WHSFCA. Jim coached basketball, track, baseball, and volleyball through the years. He was varsity basketball coach for 39 years. His record was 476 wins and 341 losses. He had one team, which was undefeated in regular season play and in 1988 his team was runner-up for the State Class C Championship. In addition to his teaching and coaching duties Jim was Athletic Director for 29 years. He retired from teaching and coaching in 1993. He and his wife, Pauline, have four children: Laurie, David, Michael, and Jon.

Jim has always felt that teaching and coaching young people is the highest and most noble professions.