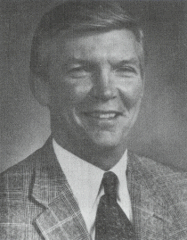 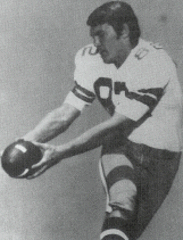 After graduating from Madison East High School, where he was All-State in football and basketball, Pat began his affiliation with the UW Badgers. As an undergraduate he earned three letters in football, basketball, and baseball. Pat earned All-American honors in 1961-62, Academic All-American (1962) and All-Big Ten (1961-62) honors as a football end. He led Wisconsin to the 1963 Rose Bowl and set a game record 11 receptions. Richter led the Big 10 in receiving twice and as a senior won Wisconsin 1963 Big 10 Medal of Honor (for proficiency in scholarship and athletics). Pat earned All-League honors in baseball and earned his scholarship in basketball where he played three years.

After graduation in 1964, Pat was a first round draft pick of the NFL's Washington Redskins. He played from 1963-71. He earned his law degree in 1971 and began working for a private law firm. Pat latter moved to Oscar Mayer as Vice President of Personnel at the Oscar Mayer Corporation in Madison, Richter was honored with the NCAA Silver Anniversary Award for post-college achievements in 1988. He is a member of the Wisconsin State Athletic and Madison Sports Hall of Fame, the NFL Player and Alumni Associations, the UW Athletes Hall of Fame, Rose Bowl Hall of Fame and is a member of the Dane County and Wisconsin Bar Associations.

Last spring he was a finalist for induction into the CoSIDA Academic All-American Hall of Fame. Pat also serves on the Boy Scout Advisory Board as well as the Advisory Board of the Ronald McDonald House. Pat Richter was named to the position of Athletic Director at Wisconsin in 1989, where he is in charge of 20 sports, nearly 700 student-athletes, more than 160 employees and a large physical plant.