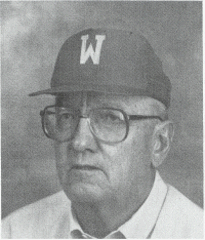 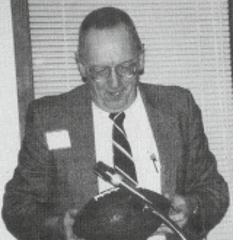 Burt prepped at Bloomer High School, captained 1948 undefeated, untied team and always has been proud of his Heart 0' The North Conference heritage. He participated in the 1949 Coaches Association high school all-star game at old City Stadium in Green Bay.

Burt played under Ivy Williamson at Wisconsin and was a member of the 1951 "Hard Rocks." He tied for conference leadership in pass interceptions with the 1952 Big 10 co-champions and played in the 1953 Rose Bowl.

Burt coached and taught history at Madison West High School for 40 years. His teams won 199 games and 26 state, conference and city championships during his 35-year tenure as head coach. Burt, who was always an advocate of difficult schedules, once played the state champions of three states -- Iowa, Michigan and Wisconsin -- in the same season, 1981.

He like to be known as a "player's coach! " Numerous student-athletes of his received college scholarships and went on to play in the NFL.

Burt is a life member of the American Football Coaches Association and is the only high school coach from Wisconsin ever to address its National Convention. One son also played for the Badgers and another became a high school coach in the state.

Burt was always an enthusiastic supporter of all sports, encouraged his players to be active on other teams and in non-athletic activities. He promoted other programs for boys and girls in his school, conference, and district.