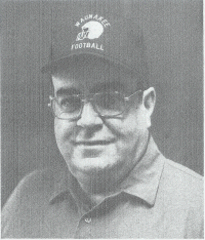 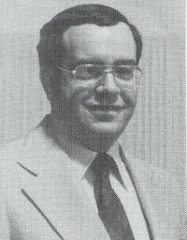 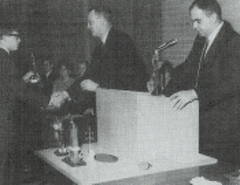 Gayle Quinn has spent a total of 37 years as a teacher/coach. He started his high school coaching career at Azusa High School and completed it at Waunakee High School. Gayle's overall football coaching record at the two schools was 203-81-3 which included 15 conference championships and 3 undefeated seasons. He credits his coaching success to "kids with tremendous pride and a willingness to give it all to be the best that they could be" and a group of very loyal, hardworking, knowledgeable assistant coaches.

Gayle has affected football in the state of Wisconsin in many ways, but none with more far-reaching benefits than our Association's State Clinic. In 1976, when our State Football Coaches Association was in its infancy, several coaches approached Gayle about "heading-up" a clinic that would provide top flight speakers as well as introduce new training and safety concepts to Wisconsin coaches. Ira Rebella, the first Association President, gave Gayle a free hand and challenged him with this complex task.

Gayle's efforts on behalf of Wisconsin football continued in other areas as he was assigned to the W.I.A.A. Advisory Council. During that time the football championships became a long-awaited reality. He also served as District Representative in our Association's formative years, helping to mold our State Association into a strong and respected institution in our state.

One of his biggest thrills was being named the head coach for the 1980 South All Star team sponsored by the Shriners. This was an opportunity to coach the "best of the best" in our state, and among the many players on that team who went on to great careers was Dan Turk who is still playing with the Oakland Raiders.

As Gayle looked back on his years of work, he treasures his opportunity to work with people like John Jardine and Dave McClain of the University of Wisconsin, as well as working with people like Woody Hayes, Bart Starr and the many other quality speakers at the Clinic.

His 200 plus wins as a high school coach put him in an elite category with only a handful of Wisconsin coaches; however, he lists his greatest pleasure as "the opportunity to know and work with many fine people. I have many great memories and life-long friendships that make this a career that I would love to repeat."