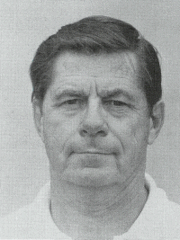 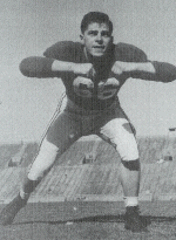 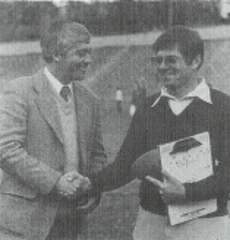 Ron established Lawrence University's football program as one of the most successful in the country. He guided the Vikings to a school-record six Midwest Conference Championships, including three consecutive titles from 1979-81, the only time in Lawrence's 98-year football history that's been accomplished.

In 1981, he directed the Vikings to an NCAA Division III playoff appearance, a trip that reached the national semifinals. It marked the first time a Midwest Conference member was selected to the NCAA playoffs and still ranks as the farthest advancement in the playoffs by a Midwest Conference team. Lawrence's all-time winningest coach, Ron, started his last season in 1992 ranked 15th among all NCAA Division III coaches in career victories (119) and 22nd among coaches in winning percentage (.716).

Ron joined the Lawrence athletic department in 1963 and assumed the head coach duties in 1965. His first year as head coach he took over a Viking team that was 2-6 the year before and guided them to a 5-3 mark. The following year Ron won the first of his six Midwest Conference titles. In just his third season, he directed the Vikings to a second straight league crown and a perfect 8-0 mark, one of only four unbeaten, untied seasons in school history. He produced winning teams in 14 of his 19 seasons as head coach, including an incredible l0-year run from 1974-1983 in which the Vikings never lost more than two games in a season. Ron compiled a phenomenal 77-15 record during that span, including a school-record, 18 game winning streak during the 1980-81 seasons.

Following graduation from Wisconsin and a subsequent two-year stint as an army officer in Georgia, Ron returned to Chicago and took over the head coaching duties at his high school alma mater. Although Crane had not won a football game in three seasons, Ron won a division championship his first season and took Crane to the city playoffs three consecutive years. In 1960 he moved to suburban East Leyden High School, reviving a program that had gone two years without a victory, before moving on to Lawrence. Ron was named Lawrence athletic director (1970), full professor (1972) and also coached the tennis, wrestling, and track teams during his 30-year career.

In the late 1980's Ron traveled to England to join his son, then a standout quarterback for the London Ravens. Ron coached the Ravens to the British National Championship in 1987, a Conference Championship in 1988 (26-2 record), and was elected Coach of the Year.