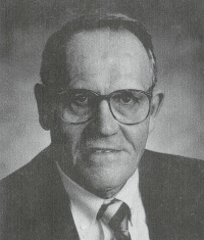 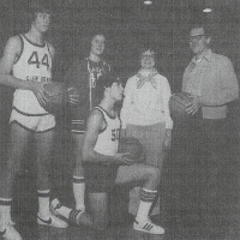 Drafted into the army and served as a rifleman in World War II in Europe-C Company, 411th Regiment, 1O3rd Infantry Division. Wounded while attacking a bunker in the Siegfried Line and received the Purple Heart. Discharged December, 1945. Played two years of football for the Wal-Tana town team which was sponsored by the American Legion. Enrolled at Carthage College at Carthage, Illinois, Fall, 1948. Played football there and lettered three years--also lettered in basketball. Married Pat Meyer whom he met at Carthage. In 1952 he went to Goodman, Wisconsin, as a physical education teacher and head football, basketball and track/baseball coach. The 1952 football team went undefeated and became M & 0 Conference champions.

The Sauk City basketball team won the 1959-60 Tri-County championship. The 1963 Sauk City baseball team tied with Prairie du Sac and Waunakee for the conference championship. Sank Prairie, the newly consolidated district of Sauk City and Prairie du Sac, joined the South Central Conference in 1964. The first year Gene was the freshmen football coach. Then he was the defensive coordinator through 1983. Sauk went undefeated in 1969, when Roger Moe was the head coach. Later Scott Seeliger took over as head coach, and they went undefeated in 1975, the closest game being, a 7-6 win over Baraboo.

In its second year of participation, the 1975-76 season, the girls' basketball team won the conference championship. Also about this time Gene became Athletic Director, a position he stayed with until 1991. Paul Jesberger became head football coach, and in 1981 Sank won their first championship in the Badger Conference. In order to do that, they had to defeat Dick Rundle's Monona Grove team, at Monona Grove.