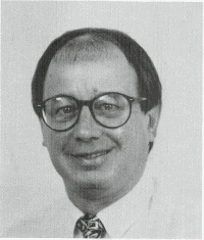 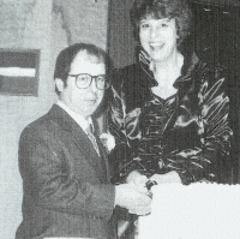 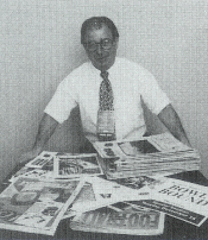 If ever there was a labor of love, Dave Wedeward has performed it as a writer and the sports editor for The Janesville Gazette.

In a career that has exceeded 30 years, all at the same newspaper, Dave has dedicated his life to covering and admiring the coaches and athletes of Southern Wisconsin and beyond.

"I can't imagine doing anything else or doing it any other place," Dave said at the time of his induction into the Wisconsin Football Coaches Association Hall of Fame. "I've loved every minute of it, and I wouldn't be happy anywhere else."

Happiness for Dave has come in having a hand in all sports, but especially football. As a football fan and writer, he has touched countless lives in covering more than 350 games at the high school, college and professional levels.

"That's always been the most important thing - the people," Dave said. "Getting to know people and following their careers brings a special satisfaction."

Dave also has gained satisfaction in helping people. Away from sports, he has achieved that as a long-time member and past-president of the Edgerton Lions Club.

In football, he has spent his free time serving on the Associated Press all-state selection committee since 1973. That not only has kept him close to the many outstanding coaches and players, but it has enabled him to help kids earn the recognition they deserve.

"I've told my wife that, when I die, if people don't remember anything else about me, I hope they remember that I always cared about people," Dave said.

Dave began his career as a caring sports journalist while he was a junior at Edgerton High School in 1960. He got a chance then to work for the local weekly newspaper, and he took advantage of that opportunity over the next five years to learn every aspect of the business.

Dave joined The Janesville Gazette sports staff in 1965. He was promoted in 1972 to sports editor, a position he still holds at the time of his induction.

Dave is well-known for his High Notes, the award-winning high school sports column he founded in 1967. He also made the Gazette a leader in producing a preseason football tabloid in 1971, a supplement that now has been published 25 consecutive years.

Dave has covered and promoted the high school football playoffs since their inception in 1976. He also has covered University of Wisconsin football regularly since 1972, including the 1994 Rose Bowl.