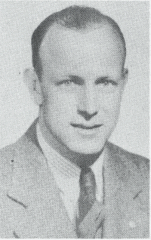 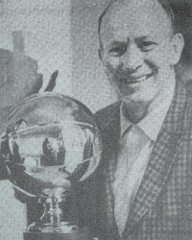 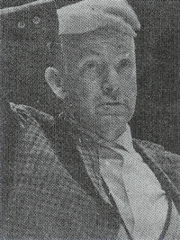 "Weenie" lettered in football, basketball, baseball, and track while at Richland Center High School. He led his 1933 basketball team to the WIAA state basketball tournament. He entered the University of Wisconsin in 1933 and became a varsity halfback in 1935. He ran 96 yards against the University of Michigan the first time he carried the ball. He was a nationally ranked punter and also returned a punt for one of the longest returns of that era.

"Weenie" joined the Green Bay Packers in 1938, but the next year he joined and served in the U.S. Navy during World War ll. He was honorably discharged in 1943. He then entered spring training with the St. Louis Cardinals baseball team. In 1943 he resumed his studies at the University of Dubuque and received his degree in physical education in 1944.

"Weenie’s" basketball team at Dodgeville High School won the state championship in 1964 and was runner-up in 1963. This was done with a school enrollment under 300 and a basketball tournament of only one class. In a community rich in tradition in basketball and baseball - John "Weenie" Wilson was a winning football coach.

He started teaching and coaching at Dodgeville in 1944 as a head coach in football, basketball and baseball. His football teams were 47-43 with 6 ties. His teams were SWAL co-champs with either Darlington or Prairie du Chien four times during his 17 years as head coach. He remained as defensive coordinator, after serving as head coach, and his 1958 team only allowed 20 points for the eight-game season.

In 1951 "Weenie" was named as the head coach of the southern all-state football team. He was also named co-coach of the SW AL four times. "Weenie" and his wife Blanche had no children of their own, but every athlete and student "Weenie" came in contact with could feel like they were their children. "Weenie" was always working for his boys and got several of them college opportunities they never would have gotten on their own, including the executive director of the WFCA, Dick Rundle. He seldom missed an athletic contest where one of his boys was participating. "Weenie" ran the summer recreation program for the city of Dodgeville.

He was awarded the Platteville J.C. physical fitness award in 1964 and was recipient of the Madison Pen and Mike award as Sportsman of the Year in 1963-64. He is also a charter member of the Wisconsin Basketball and Baseball Coaches Hall of Fame, the only coach in Wisconsin history to be a member of all three Halls of Fame.