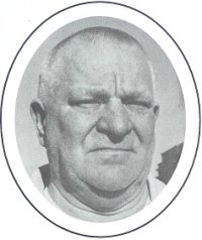 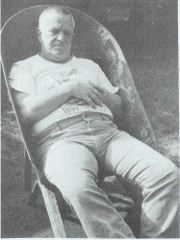 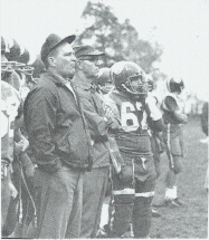 Frank "Buda" graduated from East Division High School, Milwaukee, Wisconsin, in 1952. He received his B.S. in Secondary Education from the UW-Milwaukee in 1960.

Frank began teaching in January of 1960 for the Milwaukee Public Schools as a substitute teacher and was appointed to a full-time 'position in September of 1960. His assignment was to Boy's Trade and Technical High School as a physical education teacher, freshman-sophomore football coach and assistant swimming coach. Through night school and summer school he earned his major in physical education from the UW-Milwaukee in June of 1962.

In September of 1963 he was appointed line coach to future Hall-of-Famer James T. Richardson. In this capacity he helped Tech to win nine conference championships and the teams were twice chosen as #1 in the state. Frank took over as head coach at Milwaukee Tech (which now had a name change and was co-educational) in 1976. As head coach the Trojans won conference championships in '77, '78, '79, '81, 83, '85, and'86. Frank was chosen the Milwaukee Metro Coach of the Yea in 1986. In 1986 Tech became the only city school to play at Cam Randall, losing the Stat Championship to Manitowoc.

During 1987 and 1988 Frank took a leave of absence from his direct coaching duties to watch his son Michael play for Marquette University High School and attain two WISAA State Championships He continued to provide guidance dedication and scouting reports to new head coach Tom Konowalski to enable Tech to win city championships in 1987 and 1988. In 1989 Frank was appointed First Assistant to Konowalski and Tech went on to win championships in '92 '93, '94, and '95. Overall, as Head Coach and Assistant Coach, Tech's record was 236 wins and 56 losses.

Frank also served as Head Coach and Assistant Coach for the Ted swimming team during 1960-1981. During that time Tech won the City Championship 22 times.

At the Milwaukee East Division High School Frank played on the single wing City Championship Team of 1950, which was coached by Spence Potter. In college at the Milwaukee State Teachers College he continued to play single wing as a guard under Coach Herman Kluge.

Milwaukee Boys' Trade and Technical High School, renamed the Milwaukee Trade and Technical High School, has been the only school at which Coach Frank taught and coached for 36 year. He immensely loved and enjoyed his association with the institution. Through the years his best fan and loyal companion has been his wife, Mary Gale, who is also a Milwaukee Public Schools teacher. Frank and Mary Gale are proud parents of Patrick and Michael.