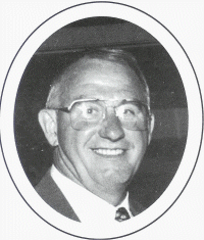 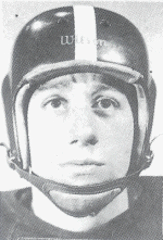 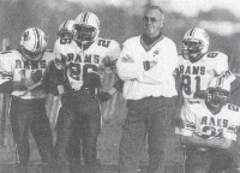 "He was as tough as they make 'em." That's how coach Jimmy Richardson of Milwaukee Boys' Tech High School (himself a WFCA Hall of Famer) described his all-conference, all-state tackle, Gregg Dufek. "He played with a fractured jaw and a bad knee, and we used more tape on him than any other player. But he played every game."

Gregg's love of football was born in pickup games with his older brothers. They didn't want him to play because he was too small, but his burning desire won them over. His passion for football compelled him to crawl under the fence at State Fair Park in fall of 1947 to watch his first professional game, the Green Bay Packers and Don Hutson against the Washington Redskins. He capped the experience by getting Sammy Baugh's autograph.

Gregg began playing organized football in fifth grade at St. Florian's, and he continued through four years at Montana State University, where he earned all-Rocky Mountain Conference mention. After graduation he had a tryout with the American Football League's first champions, the Houston Oilers, but his chronic bad knees ended his playing days.

In 1958 Gregg commenced his 38-year career as a teacher in the Milwaukee Public Schools. He served as an assistant football coach for four years, head track coach for two years, and assistant track coach for 33 years. Most notably, from 1964 to 1996, Gregg was a biology teacher and head football coach at Milwaukee Pulaski High School. His teams won two conference championships and finished as runners-up ten times.

Gregg also helped coach the semi-pro West Allis Racers and served as coach and administrator of Medalist Hall of Fame Camps in football, basketball, and wrestling. He was a member of the committee that set up the WIAA football playoff system. He served as president of the Milwaukee Coaches' Association. Gregg has received numerous football honors. He was inducted into the Montana State Athletic Hall of Fame in 1987. He was chosen 1995 Milwaukee City Conference Football Coach of the Year. He was selected as an assistant coach of the 1994 Shrine Bowl and co-head coach of the 1996 Shrine Bowl.

What he remembers most fondly from his coaching career, though, and what he is most grateful for, is the time spent with his ball players, both during and after their football days. He values the weekly pasta dinners with the team and the daily meetings under the goalpost that always concluded practice. He is proud to have taught so many fine young men about teamwork and family and winning and losing with grace.