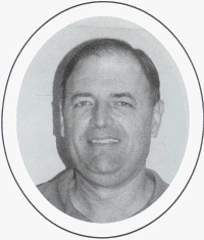 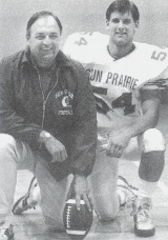 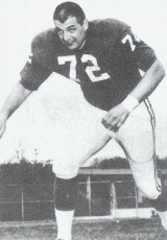 At Beloit Catholic he met his wife, Pat, as a freshmen and has treasured her friendship and love for 38 years.

In high school Mike was involved in the National Honor Society, the Quill and Scroll Society, Badger Boys' State and was an editor of the high school paper, as well as being awarded the Scholastic-Athlete of the Year in 1964. He is honored as a Charter member of Beloit Catholic High's "Wall of Fame.

Upon graduation from high school, Mike selected a scholarship to attend Northwestern University. While in school at Northwestern, Pat and Mike were married on June 17,1967.

After the 1968-69 year Mike became the head football coach, at age 23, at St. Edward High School in Elgin, Illinois. He was appointed the Dean of Students and spent 3 years working in the Chicago Catholic League playing teams like Notre Dame of Niles and Joliet Catholic.

In 1972 Mike and his family moved to Sun Prairie and found the town they would spend their life in; with Pat teaching elementary school at Sacred Hearts School and Mike teaching social studies and physical education as well as taking over the head football coaching position from Fran Sheehan (Hall of Fame Charter Member 1980). This fall (1998) Mike finished his 27th year at Sun Prairie and continues to teach and coach football at the school he loves. Mike has served as Department Chair of Physical Education as well as the Department Chair for Health and is currently teaching physical education at the high school.

Since 1972 the Sun Prairie Cardinals have had continued success - being honored as the No.1 team in the state in 1973 by the Wisconsin Press Association and winning two Badger Conference Championships, nine Big 8 Titles and the State Division 1 Championship in 1995. Mike's record at Sun Prairie is 194-74-2 and overall is 199-95-3 and counting.

Mike has been involved in our coaching association's work from early on as a three-term member of the Board of Directors, a 1980 Shrine Bowl Coach, 1977-1982 Editor of The Point After, our association newspaper, and chairman of the State Football Clinic for 13 years ending his tenure in 1994.