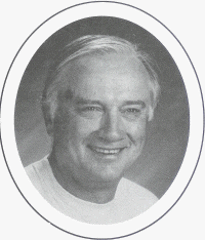 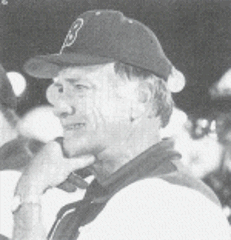 John was born in Portage on May 30, 1935, the son of Gustave "Monk" and Helen Heineke. His brother Jim also encouraged and supported his coaching career.

He attended the Wisconsin Dells schools, graduating in 1953. He was an honor roll student and participated in football, basketball, baseball and track, earning ten varsity letters. He won All-Conference honors in football and basketball, and also received All-State mention in football.

John served his country in the U.S. Army from 1958-60, receiving an ROTC commission upon graduation. He was a player-coach on the 1959 Brooke Army Medical Center service champions. He coached the line on both sides of the ball. He also coached Ft. Sam Houston (TX) to the 4th Army basketball championship in 1959-60. He received an honorable discharge as a Captain in 1960.

In 1983, John was named the head coach of the WFCA-Shrine south football team. His coaching staff included two of this year's inductees - Kip Cramer and Ed Rux. During his coaching career he had the privilege of coaching against several of the initial inductees in the Hall of Fame - Al Mancheski (Green Bay East), Ade Dillion (Appleton), Andy Anderson (Sheboygan South), Harold Schermuth (Oshkosh) and later John Biolo (Green Bay West). During his coaching career he also started swimming at Beloit and coached it from 1967-72. He was an assistant coach in swimming, baseball, softball and track at various times during his thirty-eight-year coaching career.

During the off-season, he spent thirty years as a basketball official, appearing in eight state championship tournaments. His last game was the Class A championship game in 1988, a double-overtime game between Fond du Lac and Milwaukee Washington.