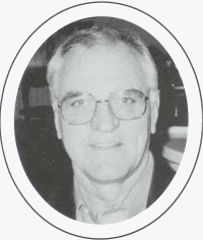 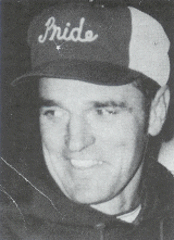 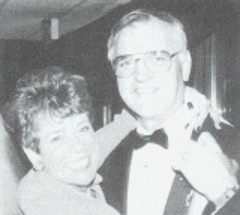 Graduate of Menomonee Falls High School, 1957, B.S. in Physical Education from the University of Wisconsin at La Crosse, 1962, M.A. from Winona State University, 1968

The first thing that Jim Jeskewitz would like to emphasize about his successful 34-year football coaching career is that he didn't do it alone.

"There's simply no way," said Jim, who retired from the Menomonee Falls School District in 1997. "I've had great assistants along the way especially Bob Hessler. They made the job that much easier for me, and I couldn't have gotten this far without the support of my wife Sue. It takes a great deal of commitment and patience to be a football coach's wife."

The idea that Sue Jeskewitz, currently a Wisconsin state legislator, had all the necessary qualities to be a football coach's wife is clearly displayed by a little sign that hangs near the Jeskewitz fireplace. "We interrupt this marriage to bring you the football season." The couple has been married for 33 years.

Support also came from his parents. In fact, Jim's father, Oscar, is still going strong at age 88. Jim estimates that his dad only missed five games in the 28 years in the Falls. Yes indeed. Jim had the support, and the skill. The skill was manifested early. Jim was a basketball, football and baseball ace at old Falls High School before heading off to La Crosse where he earned all-WSUC and All-American honors as a defensive back in 1961. He was all set to play in the Canadian Football League with Toronto when cancer surgery cut short his playing career. Still, the love of the game burned deep within him.

After graduation from La Crosse, he went to Melrose High School, where he served as an assistant in 1962, and from there, he went to the new high school of Bay Port, in Green Bay, where he helped initiate the school's football program. He served there through 1967.

When opportunity presented itself in the then rapidly growing school district in Menomonee Falls in 1969, Jim jumped at the opportunity to come back home. He took over the football program at the "new" school Falls East, and along with a talented group of assistants including Hessler, Terry Thomas, Terry Schmidt, Paul Kipping and Ken Heckler, brought instantaneous and then sustained success to the program. They turned in a 5-3-1 record that first year.

Jim won the first of four Braveland Conference titles at East in 1972. An early proponent of a state playoff system, Jim led a team that lacked stars, but had great chemistry, to the WIAA Division 2 title in the fIrst year of the playoff program back in 1976. A 12-7 victory over Clintonville secured Falls a place in history.

When the Falls District consolidated in 1984, Jim was named to take over the newly united programs. Success again came quickly. In 1985, he led a band of small, but tenacious overachievers to a Braveland Conference title and a WIAA State Division I runner-up berth. The Indians fell to the juggernaut Manitowoc, 17-0, in the final. It was the second of the Ships' three consecutive titles.

The Indians, with even less talent the next season, went through a heart stopping unbeaten 9-0 regular season that featured several last-second victories. Jim last took the Indians to a conference title in 1991, claiming the championship with a pivotal victory over long-time rival Hartland Arrowhead, led by Tom Taraska. That title was all the sweeter because son Chad was a starting linebacker on the squad.

All told, Jim led the Falls to seven WIAA state playoff berths. The last coming in an injury riddled 1996 season. The Indians gritty 7-0 loss to eventual champion Arrowhead in a first-round game played in a torrential rainstorm was to be Jim's valedictory.

In a bit of irony, by stopping when he did, Jim fell one victory short of a goal many coaches long to reach, 200 wins. His career total reads 199.

"To tell you the truth, I never kept track until somebody told me in that last season," he said. "That's important for some people, but not for me. The big thing for me was to make it a good experience for the kids. Have fun. High School is the last opportunity for the vast majority of them to play in interscholastic athletics. I wanted to leave them with a good taste in their mouths, because something like that can last a long time."

"To tell you the truth, I never had a bad day," he said. "Some were better than others, of course, but I never minded getting up in the morning."