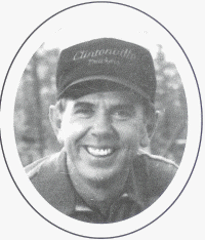 Earned nine letters in football, basketball, and baseball. Named Athlete of the Year in 1961, and selected to the Lakeland College Hall of Fame in 1972. Received M.A. in Physical Education from UW-La Crosse in 1967.

Chet's first head football coaching position was in Mineral Point, WI. He had the good fortune of having future Hall of Famer Bill Rice and future Badger basketball coach Dick Bennett on his staff. With some fine talent, they were able to turn a struggling program into a championship contender. In 1967, they went their separate ways. Chet took over the program in Clintonville, where he replaced a legend, Tony Ellis. T.D. Ellis was a 25-year fixture as head man of the "Truckers," and a future Hall of Famer. In 1970, Clintonville left the Mid-East Conference and joined the newly formed Bay Conference. The Truckers became a strong force despite the fact that they were one of the smallest schools in enrollment size. During the middle 70's and into the 80's, Clintonville had a great run of success, due mainly to a large number of outstanding athletes. The Truckers participated in the first ever State Championship series in 1976. They were able to use that experience to help bring home a Division 2 State Championship in 1978. The Truckers put together a 36-4 record during that run, including a 22 game winning streak.

Chet also experienced the other side as well, dealing with a 13 game losing streak in the early 90's. Chet would like to be remembered as a player's coach, giving his players an opportunity to excel not only in football, but other areas as well. He felt that the high school football experience should be one that they would look back to with fond memories.

Much of Chet's coaching philosophy can be traced to the coaches he came in contact with. Starting with his college coach, John Allen, and continuing throughout to the many fine men he has come in contact with on both sides of the field. Chet would like to thank his many fine players and assistants at Mineral Point and Clintonville, especially Bill Kinziger, Todd Lukoski, Charlie Shingler, Bruce Parkovich, and Joe Banaszak. Chet would like to give very special and public thanks to his mother Mildred and his wife Gail. Without their many sacrifices, he would not have been able to pursue his dream. He would like to also thank his sons and daughter for giving him the opportunity and privilege to work with them.