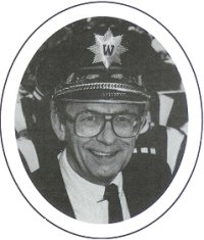 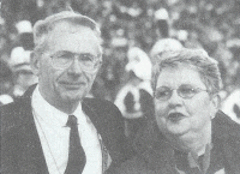 Mike came to Wisconsin in 1969, and under his guidance, the UW Band has achieved national recognition, entertaining sports fans from coast to coast with unmatched enthusiasm and exceptional school spirit. In 1978 he initiated the "Fifth Quarter," a world famous audience participation event that begins immediately after every Badger home game. Over the years, the Wisconsin Band has garnered rave reviews wherever they perform: At the Garden State Bowl, the Independence Bowl, the Hall of Fame Bowl in Birmingham (where headlines proclaimed, "THE BADGER BAND STEALS THE SHOW,") and at Lambeau Field. There have been unprecedented performances in Las Vegas (The Las Vegas Sun declared them, "THE BEST SHOW IN TOWN"), and in 1992 the band set a performance benchmark with a marching exhibition on the deck of the USS Nimitz. In 1994 the band was a major factor in transforming Pasadena's Rose Bowl into "Camp Randall West," and since then they have enthralled audiences at the Copper Bowl, the Outback Bowl, the Kick-Off Classic, and once again at the 1999 Rose Bowl.

Mike holds memberships in numerous professional organizations and honorary fraternities. He is a 25-year member of ASCAP and has been elected to the American Bandmasters Association. In 1970 he was cited as an "Outstanding Educator" of America, in 1973 was awarded the "Outstanding Bandmaster Award" and in 1986 was presented with a "Citation of Excellence" by the National Band Association.

He is a recipient of the:

Mike has been inducted into the Wisconsin Hockey "Hall of Fame," he has been commissioned a "Kentucky Colonel" by the Governor of Kentucky, and was named a "Badger Legend" by the Governor of Wisconsin. The University of Wisconsin has also honored him with a prestigious "John Bascom Professorship." Over 200 of his musical works have been published, and he is the author of two texts on marching band, a handbook for arranging and a text dealing with popular music in America.