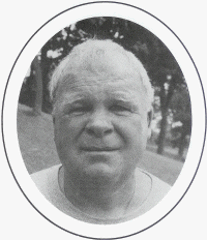 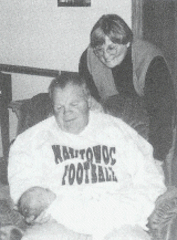 Ron graduated from Manistique High School in Michigan in 1960. In high school, Ron earned 13 letters; four in track and three each in baseball, basketball and football. He was named to the Michigan All-State Football Dream Team his senior year and was named a High School All-American. He set an Upper Peninsula scoring record his senior year with 29 touchdowns and 183 points with 103 carries for 1388 yards and a 13-1/2 yard per carry average. Ron attended Michigan State University on a football scholarship in 1960, and during his junior year he set a Michigan State single game rushing record against North Carolina when he gained 207 yards in 14 carries. His senior year, Ron played in the College Shriners' North/South All-Star Game.

After completing his eligibility, Ron helped coach the Michigan State freshman football team in 1964. In 1965, he started his high school coaching career at LaSalle High School in St. Ignace, Michigan, where he was the Head Football Coach, Co-Head Track Coach and Assistant Basketball Coach. His football team went 8-0 and were conference champs. In 1966, he moved on to Manistique High School where his team posted a 4-5 record. He also started the wrestling program at Manistique.

In 1967, Ron moved to Manitowoc and became a varsity assistant football coach before becoming the head coach in 1968. His Manitowoc teams have posted a record of 179 wins, 106 losses, and three ties, including nine conference championships. His teams have made the playoffs 10 times and have won three consecutive state championships in 1984, 1985, and 1986. During the years 1983-1987, his teams recorded 48 straight wins which still stands as the state record. His career record as a varsity head coach is 191 wins, 111 losses, and three ties. Ron was Paul Engen's assistant coach in the 1987 Shrine/WFCA All-Star game.

Ron was selected as the Associated Press Coach of the Year in 1985 and 1986 and the WFCA Coach of the Year in 1986. He was selected to the Michigan Upper Peninsula Sports Hall of Fame in 1978 and the Lakeshore Sports Hall of Fame in 1987. He was one of three finalists for the Milwaukee Athletic Club Foundation Founders Award in 1986.

"I would like to thank my peers for selecting me to the WFCA Hall of Fame. I have been very fortunate during my 34 years of coaching to have the support of my wife Jo-Nell who has stood behind me during the good times and the tough times. She had to raise our two children, B.J. and Becky, almost by herself because of the number of hours that go into coaching. B.J. was on the team that started the 48-game winning streak, and Becky was a cheerleader for the three teams that won state championships.

"I would like to thank the young men that I have been privileged to coach. I have been very fortunate over the years to work with many outstanding assistant coaches who have helped shape my coaching philosophy. My assistant coaches are much like offensive and defensive linemen. They are the heart and soul of the team but never seem to receive the credit that they so richly deserve. I would like to thank the athletic directors, administrators, secretaries, custodians, teachers, parents and fans who have been so supportive to our program; also, my junior high coaches, the media, and all the other people who have helped the program by video taping, keeping stats, cheerleading, the pom squad, marching band, and everybody else who helped to make a successful football program. I would like to thank all my coaching rivals over the years. I have been able to compete and match wits with many outstanding people. Last, but certainly not least, I would like to thank my parents, Seb and Florence, and my brothers, Seb and George, for all their support and encouragement over the years. Without all these people and their support, I never would be able to receive this coaching honor."