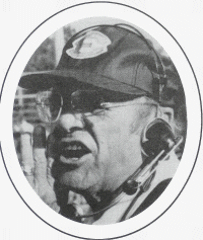 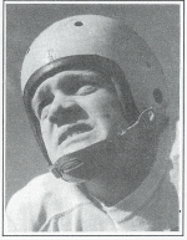 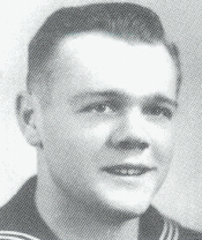 Link Walker's life has had 6 phases…as a youth growing up in Eau Claire, as a rangefinder in the U.S. Navy during World War II, as an athlete at Eau Claire State, as a prep coach in Wisconsin, as the UW-Eau Claire head coach for 19 years and in retirement.

The only child of a carpenter/contractor, Walker grew up in Eau Claire, graduating from Eau Claire Senior High in 1943. He enlisted in the U.S. Navy in 1943 at age 17 and served 2-1/2 years as a rangefinder on a destroyer in WWII. He returned to Eau Claire where he enrolled at what was then Eau Claire State Teacher's College and served as a quarterback for the Blugolds' 1948 conference championship team, the school's first outright league title. He earned eight letters in football and baseball.

Following his graduation, he spent 12 years in the prep ranks with one year at Elcho, one year at Abbotsford, four years at Stanley and six years at Antigo. He had an overall high school record of 65-29-2 and his 1959 Antigo team was ranked No.2 in the state prior to the time of the state championship series.

For the next 19 years, he guided the Blugold fortunes with his most successful era coming in the early 1980's. During that three-year stretch, his teams produced a 23-7 overall record, a 21-3 conference record, won two Wisconsin State University Conference championships and won 20 consecutive home conference games. His 1981 team went undefeated in the League, finished 9-1 overall and was ranked No.9 in NAIA Division I, missing the national playoffs by one game. His 19-year Blugold record was 104-85-3 giving him a 31-year head coaching record of 169-114-5.

Walker was inducted into the UW-Eau Claire Blugold Hall of Fame in 1987. His induction plaque has the following two statements: "His players respected for their toughness and competitiveness" and "Will be remembered for his humor, honesty and sincere love of the game of football." Walker was twice the WSUC and NAIA District 14 Coach of the Year.

Among the things Walker takes pride in are the number of his assistant coaches and players who went on to coach in both the high school ranks and the Division I collegiate ranks. Also, Walker was the first Blugold coach to schedule intersectional games, traveling to Ohio, Indiana, Illinois and Nebraska to play games. He also produced five first team All-Americans in defensive back Mike March, running back Roger Vann, offensive tackle Jeff Wilson, running back Lee Weigel and offensive tackle Wil Beech. He also had six Academic All-Americans in Paul Sinclair, John Kuhn, Grant Bashore, John McBride, Mark Anderson and Mike Zeihen.