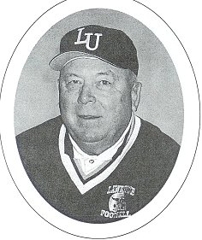 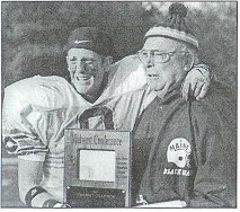 Sparky graduated from Kimberly High School in 1948 where he played football, basketball, baseball and ran track. After high school, he enlisted in the United States Coast Guard and served until 1951. He attended Lawrence University (51-55), where he also played football.

Sparky's first job was in Iron Mountain, Michigan, as assistant varsity football and assistant varsity basketball coach. His basketball record was 15-5 with a win in the regional, sectional and second in State Class B. From there he moved to Hartland Arrowhead and his team won the first football championship in the history of the school. He also served as assistant basketball coach, with a record of 48-12 and three conference championships. From 1959-69, Sparky was hired as part-time personnel by Gil Brandt of the Dallas Cowboys, to scout films for the draft.

From 1969-73, Sparky was hired by Coach Jack Wallace to serve as an assistant football coach at Drake University. Coach Wallace taught him that coaching fundamentals must be based on good teaching. While at Drake, they won one MVC championship and played in two bowl games (31-13-2). He compiled a record of 31-17 as head football coach at Chadron State (73-78), 2nd best in the history of CSC football, which has since been surpassed by one of his former assistants.

Sparky's tenure at Bemidji State as head football coach began with the rebuilding of the program and the loss of his oldest son in an automobile accident. His record of 6-29 was a frustrating one. Understanding his need to recover from these tragedies, Don Birmingham enticed Sparky to come to Dubuque University (82-85) as assistant football coach and head baseball coach (51-51), the only winning season in the school's history).

At the request of Sparky's children to spend more time with family, his career turned to school administration and from 1985-88 he was Assistant Principal, Community Education Director, and Athletic Director at Unity High School. In 1989, Sparky took the position of High School Principal at Pittsville, Wisconsin, and was also Athletic Director from 1990-94.

Sparky retired in 1994, but couldn't stand the inactivity. He resumed his coaching career (95-98) as assistant FB coach at Carroll College, with Carroll's first Midwest Championship win in 1997. His career ended, once again, after one year (99) as assistant football at Lawrence University, Sparky's alma mater.