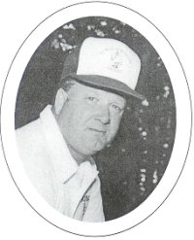 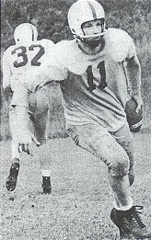 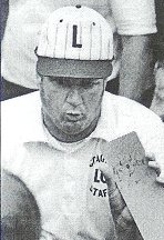 John Thome's athletic interests began in 1954 as a seventh grader at St. Mary's School in Port Washington, Wisconsin. Under the guidance of Father Fred Schramm, John participated in football, basketball, and baseball.

John continued his participation in sports at Port Washington High School from 1956-60 and received many awards. Those awards included ten varsity letters, captaining the football, basketball and baseball teams, all-conference selection in football, basketball and baseball, and all-state selections as a quarterback in football, as an MVP forward in basketball, and as a pitcher on the baseball team. John won Port Washington's Outstanding Athlete of the Year award in 1960.

John attended the University of Wisconsin-Oshkosh and graduated with a Bachelor of Science degree. While at Oshkosh, John again competed in football, basketball, and baseball. He earned ten varsity letters including honors as an MVP co-captain of the football team in 1962 and 1963 and WSUC honors at two positions. In 1988 John was inducted into the University of Wisconsin-Oshkosh Athletic Hall of Fame.

John's teaching and coaching career began at Chilton High School where he taught English and was the head football and basketball coach. Under his leadership, Chilton's football teams won three consecutive EWC championships and amassed a 24-2-1 overall record. During his time at Chilton, John enrolled in the master's program at Northern Michigan University where he earned his Master's Degree in health, recreation, and physical education.

In 1967 John was hired as an associate professor, assistant athletic director, and head football coach at Lakeland College in Sheboygan. His accomplishments at Lakeland include a record of 78-53-2, making him the most winning coach in Lakeland's history. John's football teams won nine conference championships. He was a six-time conference coach of the year and a three-time NAIA coach of the year nominee. At Lakeland, John also coached baseball where his teams won four conference titles, coached basketball and track, and was the founder of the mini-Badger Football Conference. John is a member of the Lakeland College Muskie Hall of Fame.

In 1981 John left coaching to try his hand in the business world, but in 1983 he returned to teaching and coaching as a physical education professor and defensive coordinator at Illinois Benedictine College.

Eventually John returned to Wisconsin and to high school athletics. He continued to be involved in high school football in the Sheboygan County area as a member of the coaching staffs at Kiel, Howards Grove, Oostburg, and Plymouth. John even assisted for two years at Lakeland College. His achievements include an overall, thirty-one year collegiate and scholastic football coaching record of 181-110-3 to date - a 63% winning percentage. John is currently a physical education teacher at Howards Grove High School and coach of the golf team. As "moderator" of the golf team, his teams have won five conference championships and two state titles.

John's other activities have included years as a WIAA basketball official, football camp counselor and coach, motivational speaker, and adjunct professor at McPherson College. He is a member of the National "0" (Oshkosh) Club, WEA, Wisconsin Health and Physical Education Association, and the WFCA.