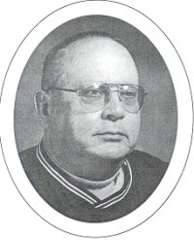 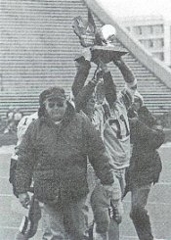 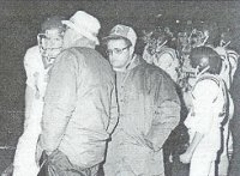 He enlisted in the Army for three years and was stationed on Okinawa for most of those years. He was Honorably Discharged in March 1963. He then attended Winona State College that fall and earned his B.S. Degree in Physical Education in May 1968. He played four years of football at Winona, lettering three of those years.

He was the Blackhawk Conference Commissioner from 1992 to 1996. Jerome continued to be the physical education instructor, athletic director and head football coach after Bloomington consolidated with West Grant starting the 1995-96 school year. Bloomington shared one more Conference Football Championship in 1995. They qualified nine times for the WIAA football playoffs, reaching the semi-finals in 1992 and 1995. Bloomington got to the Championship game in 1997 (Division VI) and lost to Flambeau 28-14 at Camp Randall.

Jerome was assistant basketball coach during the 1970-71 season when Bloomington won the WIAA Class B State Championship. He retired from teaching following the 1999-2000 school year but is still coaching football at River Ridge High School.

Jerome was a WIAA umpire in baseball for 6 years and a WIAA track official for 20 years. He is a member of the WFCA and a member of the First Lutheran Church in Mabel, Minnesota.