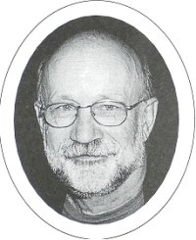 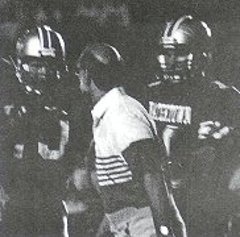 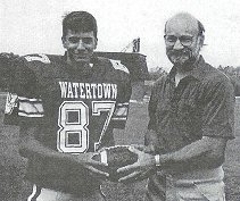 Dan graduated from Park Falls High in 1956. He earned letters in football and baseball. Dan entered the U. S. Army in 1957, serving two years. He played divisional football for the 8th Infantry in Fort Lewis, Wash., and also played one season of football for the 14th Armored Cavalry in Fulda, Germany.

In 1957, Dan enrolled at Central State College (UW-Stevens Point) where he lettered four years in football. Dan was part of a defensive team at Point in '61 that holds records for least amount of points scored in one year (51), and fewest total yards for a conference season (859). In 1963, he graduated from Point with an educational degree and BS. degree in Biology.

In the fall of '63 he began coaching at Tomah High School, Tomah, WI. Dan taught U.S. history and coached JV football and baseball. In 1965, he moved to Watertown, WI. Dan was an assistant varsity coach until 1969. He was then elevated to head football coach, and remained there until his retirement in 1999 -- 29 years as head coach.

During his career at Watertown High School he also coached one year of varsity tennis, two years as assistant swim coach and two years as 8th grade girls BB coach. In 29 years as head coach at Watertown they won 5 conference championships, had nine playoff appearances and two semifinal appearances. Dan's coaching record was 164-109-1. He also coached in two shrine games -- in 1994 as defensive coordinator (won by the south 6-3) and in 1999 as head coach (won by the south 21-7). Dan earned Area Coach of the Year honors twice.

In addition to coaching, Dan is a certified girls softball official and swim official. He has been a member of the NEA and WEA for his entire career. Dan has been a WFCA member since its inception. Dan also belongs to the Lebanon Lions Club, and is a member of St. Bernard’s Catholic Church.

An especially big part of his football and coaching career is credited to his dad, Len, who allowed him the freedom as youngster in Northern Wisconsin to explore the competition and fun of sports. Dan's three brothers, Bob, Wayne and Tom were a big part of his development as an athlete. They helped him to be an ultra and fierce competitor. His mother, Mary, was a loving and caring mother.

"To the WFCA a big THANK YOU for allowing me to achieve one of my goals as a football coach."