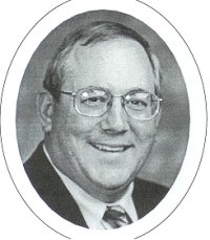 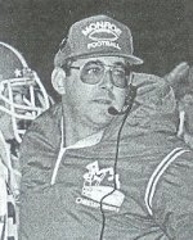 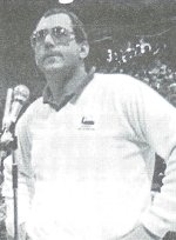 Pat graduated from St. Mary's Springs High School, Fond du Lac, Wisconsin, in 1965, where he participated in football, basketball, and track and field. He attended St. Thomas College for a year before transferring to UW-Oshkosh. He graduated from UW-Oshkosh in 1970 with a B.S. degree in Physical Education, Health, and Driver Education.

Pat's first job took him to La Crosse where he taught Physical Education at Logan Junior High School. He coached freshman football from 1971 to 1975 at Logan. He also coached basketball and tennis during his six years at Logan. In the summer of 1976, Pat became the head football coach at Fennimore High School while teaching Physical Education and Driver Education. He also coached basketball during his two years at Fennimore. His record at Fennimore was 12 wins and 6 losses with two second place conference finishes.

In 1978 Pat became the head football coach and Physical Education instructor at Monroe High School and continues at this position today. The Monroe Cheesemakers have won 11 conference titles with Pat as their coach. His Monroe teams have won 5 state titles (86, 90, 91, 92, & 94) and have been state runner-up 3 times (87, 95, 96) and made it to the semi-final game 3 other times (89, 93, 2000). In 26 years as a head coach his teams have finished first or second in their conference 19 times with an overall record of 208-71, with winning streaks of 43 and 29 games. He has a 41-10 record in WIAA playoff games. Pat has been an assistant track coach the last 21 years, and he also coached baseball for two years.

Pat was named WFCA Coach Of the Year in 1990 and 1992. He was named District Coach of the Year six times. He served as the head coach of the South team in the 1989 Wisconsin Shrine Game and served as an assistant coach for the 1998 South team. Pat served as the WFCA Awards Chairman from 1978 to 1994 and since then has been working on the WFCA clinic committee. He also served 4 terms as a WFCA District Representative.

Pat and his wife Joyce have been married 33 years. His two sons Mike and Rob played in 5 State Championship games. His daughter Julie was a statistician for his first State Championship team. He is the son of Anna Mae and Emery Martin who attended Cheesemakers games often. He would like to share this award with all his assistant coaches, especially Dick Carroll. Most importantly he would like to thank the players and the great Cheesemaker fans that helped him earn this honor.