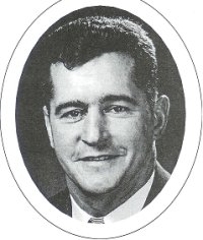 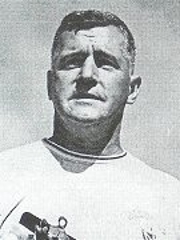 Fred attended Fremont (Ohio) Ross High School and participated in football, basketball and track. He earned a football scholarship to Marquette University, where he lettered as a fullback and linebacker from 1939 through 1941 and helped lead Marquette to a 28-7 victory over the University of Wisconsin in 1941.

During WWII, Fred served with the 3rd Marine Division as a captain, seeing combat service on Guadalcanal, Guam, and Iwo Jima. After the war, he coached freshman football at Marquette University for Lyle Blackburn.

In 1952, Fred became Colgate University's backfield coach and chief scout. He developed many of Colgate's star players in the 1950's. In 1957, he was selected to fill the head football coaching position at Colgate.

In 1959 Fred rejoined Coach Blackburn at Marquette with the challenge to rebuild the MU Football Program. In 1961, while the program was making excellent progress, MU's President decided to drop football and focus on basketball.

Fred was then recruited to become Head Football Coach and Athletic Director at Nicolet High School in Glendale, Wisconsin. From 1961 through 1975, he had a 70-53-9 record, winning the Braveland Conference Championship in 1966 with an 8-1 record. Nicolet was the conference runner-up in 1968, 1969, and 1970. During a five-year period in the late 1960' s, his Nicolet teams posted a 37-7-1 record. Known by many in the Braveland Conference as "The Gentleman's Coach," he retired from coaching in 1975, but continued to guide the athletic program until he retired in 1986. Fred's integrity, honor and dedicated work ethic, along with his strong commitment to excellence, discipline, teamwork, character development, strategic innovation and respect for others, provided a great life-learning experience for all players, coaches, managers, officials and teachers that he worked with.

His retirement years involved many family sporting activities, as his four grandchildren (Scott, Matt, Kelley and Erin Rice) were very involved in football and other sports at Middleton H.S. Another highlight was when he cheered his grandson, Matt Rice, on to success at Northwestern University, as the Wildcats won back-to-back Big Ten Football Championships in 1995 and 1996 under the leadership of Coach Gary Barnett.