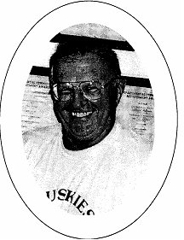 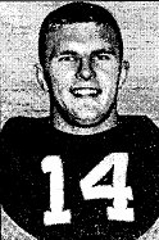 George graduated from Pulaski High School in 1956. In his four years, he earned 11 major letters in baseball, basketball, football and track.

He was named in all city basketball and baseball 3 years. Cwik attended UW Madison on a baseball scholarship, and after one year he transferred to UW Milwaukee (State Teachers College) where he lettered in basketball and baseball. He was also captain of the baseball team while he was at UWM. George was one of the first to graduate from UWM with a Physical Education major in 1964. George earned his Master's degree in Education and went on to earn 30 more credits in 1985 for a double Master's degree.

George began his career in 1963 at Whitefish Bay High School coaching freshman football. Then on to Catholic Memorial High School in Waukesha to teach and coach wrestling, football and basketball and lend a helping hand on the baseball team. After four years, he accepted a job at Milwaukee Washington High School, where he was assistant football and assistant basketball coach. In 1970, George joined the Nathan Hale High School staff where he taught physical education, health and history. During his 29 years as head football coach for the Huskies, George has three football championships and won over 100 games overall. He was also head basketball coach for 13 seasons, which included 5 championships.

George was named Coach of the Year in his district while at Nathan Hale. He helped organize the youth football program in West Allis and worked closely with the recreation department on other youth programs. He was on the Easter Seal Committee for basketball selection.

In 1999, George retired from teaching and coaching and received a Certificate of Commendation from the former Governor Tommy Thompson for 34 years of dedication and distinguished service to public education. He received a Citation by the Assembly of the State of Wisconsin for dedicating and serving over 15,000 students and coaching over 1000 participants in the athletic program at Nathan Hale High School. The fourth day of June 1999 was declared George Cwiklowski Day by the city of West Allis.

Being selected to the WFCA Hall of Fame has left him honored. George would like to thank the WFCA and all his assistant coaches over the years. Also a special "thank you" to all the players and community who still remember their coach "til the cows come home."