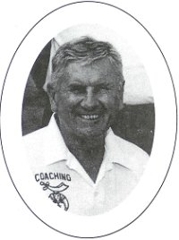 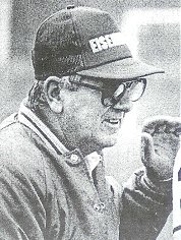 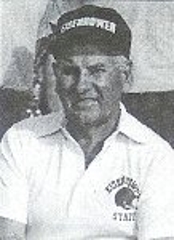 Frank married Jean Carberry in 1957; they have 4 children Timothy, Therese, Patrick, and Brian. They have two grandchildren, Conor and Tyler.

He was varsity football coach at Eisenhower High School in New Berlin, Wisconsin, for 21 years – 1969 to 1990.

In 1951, he enlisted in the U. S. Marine Corps. While in the Marines, he found time to play quarterback for the base football team in Nevada. He was discharged at the end of the Korean War and enrolled at the University of Wisconsin-La Crosse. He was the starting-quarterback for three years and won the conference title in 1954. He set records at the University as a quarterback, some of which have yet to be broken.

After graduating from La Crosse, Frank taught physical education at Waterloo High School in Waterloo, Wisconsin. He was the varsity football and baseball coach. Two years later, he moved to Mineral Point, Wisconsin, where he was varsity football and track coach. He and his family spent the summer of 1960 at the University of Wyoming working on his Master's degree.

In 1968, Frank began teaching physical education and coaching junior varsity football and basketball at New Berlin West High School in New Berlin, Wisconsin. The following year he became the first varsity football coach at the newly opened Eisenhower High School in New Berlin. At first, there were only freshmen and sophomores; then each year another grade was added. They competed on a varsity level during this building period. Eisenhower won their first conference championship in 1973. Subsequently, Eisenhower has won nine conference titles. They won five consecutive championships from 1985 to 1989. During his coaching career at Eisenhower High School, Frank had fifteen winning seasons, nine WIAA. Play-offs, and two Division Two runner-up finishes. Frank's football coaching record at Eisenhower was 84 wins and 33 losses.

Frank was honored in 1986 by being chosen as the University of Wisconsin-La Crosse Alumni Coach of the Year. In 1988, it was his privilege to coach the South Team, at the Wisconsin Shrine All-Star football game.

Frank credits the many talented football players for making his football career so successful and so fulfilling. He also wishes to thank his wife, Jean, for raising, teaching and coaching their four children. He appreciates the encouragement and support he received from his children. Their help allowed him to pursue the greatest passion in his life, the molding of young men into football players.