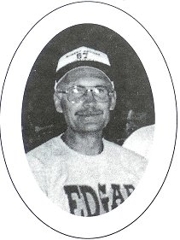 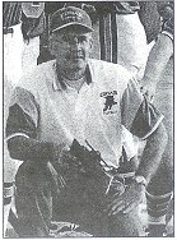 Jerry was born on a dairy farm in Elmwood Wisconsin, the seventh of 10 children of Cyril & Jeanette Sinz, on August 28,1950. He graduated from Elmwood High School in 1968 where he played football for Hall of Fame Coach Arnie McKernon. Jerry attended the UW-Stout from 1968 to 1972 and played defensive back for another Hall of Fame Coach, Max Sparger.

Jerry became the head football coach in 1975 when Edgar was seriously considering dropping football. By 1979 the Wildcats were undefeated State Champions. Edgar has now enjoyed 27 consecutive winning seasons. Included in this streak are 16 Marawood Conference Championships, 16 Play-Off appearances, 12 Final Four battles, 9 undefeated regular seasons and 7 State Championship Games, including four in a row from 1998 to 2001. Edgar has an overall play-off record of 38-12, with four State Championships. Jerry's record currently stands at 250 wins and 55 losses in 28 seasons as Head Coach. Jerry has also served as an assistant basketball coach for 30 years where he has won approximately 450 games. He has been an assistant track coach for several seasons where he helped guide Edgar to Marawood Conference Titles and to State Championships in several sprint relays.

Jerry would like to thank all his coaches and coaching colleagues and friends who have assisted him over the years. He also wishes to thank the WFCA for everything they do to promote the great game of football in Wisconsin. Special thanks, however, go to long-time assistant coaches (and wives) Brent Engleright, Dave Bielmeler, and Jim Steinke, also teaching partners and stat men Dean Wucherer and Mark Lacke and office assistant and friend Karen Paul.

Jerry is very grateful to his wife of 31 years, Barbara. They are the proud parents of four sons: Jason, Jeremy, Jordan, and Justin. Last, but certainly not least, Jerry would like to thank his parents, his five sisters and four brothers and the many fine parents, players and special fans of the Edgar area for the outstanding support over the past 30 years. We could not have done it without you.