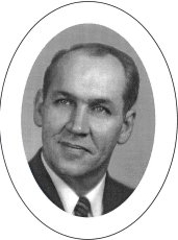 Ripon native, Paul Little, was a successful football and basketball player at Ripon High School and Ripon College. In college he was the basketball captain his senior year. After receiving a Bachelor of Philosophy degree, he began his teaching and coaching careers in 1926.

At Fennimore High School he coached track, basketball and football for three years while teaching Civics. In 1928 his football team won the Southwestern Conference Championship.

Paul accepted a teaching and coaching position at Kaukauna High School in 1929. He taught Civics, U.S. History and Economics until 1945 when he became principal of the high school. During this time he furthered his education at U.W. Madison, earning a Master of Philosophy degree and a membership in Phi Delta Kappa, a graduate honor for academic excellence. Paul continued to pursue learning the rest of his life.

In addition to his teaching and schooling, Paul was athletic director for 16 years, served on the Kaukauna Athletic Council, was the "K" Club adviser, coached basketball for 11 years and track for 10. But it was his exceptional football coaching career in Kaukauna that became widely recognized. He and his teams earned the name of the Galloping Ghosts as they conquered 10 Northeastern Wisconsin Conference championships in 16 years, 5 of them consecutively. At Kaukauna, Coach Little's overall record was 88 wins, 9 ties, 22 losses.

Since his untimely death in 1954, at the age of 51, his memory lives on. The alumni newspaper was dedicated to him. He was inducted into the K.H.S. Hall of Fame. The school trophy cases bear his name as does the football broadcasting booth. Paul Little was a man dearly loved by students, athletes, school personnel and the community.