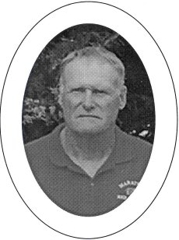 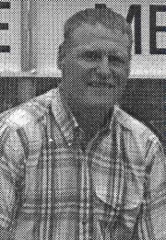 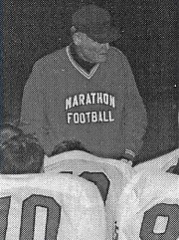 Gary graduated from Marion High School in 1962. He earned two letters each in football, basketball, and track. Gary was elected captain of the football and basketball teams and was named the out­standing all around athlete.

At UW-Stevens Point, Gary participated in football in 1963 and track in 1964. He graduated in 1966 and was hired to teach social studies at Marathon.

Marathon hired Ray Dyer, a veteran coach and Gary to start a football program in 1966. Gary became the head coach in 1967 when Dyer left. 1973 was a breakout year as Marathon went 9-0 and was rated the number one small school in the state.

Gary built the weight room at Marathon. He developed a competitive power lifting program as well as weight train­ing programs for all athletes interested in lifting.

As a history teacher, Gary began teaching specialized courses such as Russian History. In 1973 he took an educa­tional tour of the Soviet Union sponsored by UW-Madison.

Coach Raether extends a special thank you to all the assistant coaches who helped make football fun and to head track coach­es, Dick Helling, Jim Allman, and Carla Elliot who gave him free reign to develop the throwers.