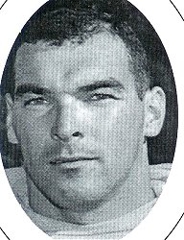 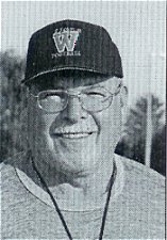 He attended the University of St. Thomas, St. Paul, MN, and participated in Varsity Football. In 1958, he graduated from M.A.T.C. in Milwaukee with an Associate Degree in Mortuary Science. Back in Eau Claire, he worked with his Dad in the family owned business, Golden Funeral Home. He retired in 1998.

In 1963, Geno attended UWEC and played football for the Blugolds as a D.E. and wide receiver. He played on the 1963 and 1964 Conference Championship teams. He gained All-Conference and All-District first team honors on the #1 ranked, undefeated '63 team & the '64 team.

Geno's 42 years of coaching and dedicated service to young people has been a very rewarding part of his life.  There was no better feeling for him than to say "I was a Coach!" He has coached grade school, YMCA youth football, Varsity Assistant football at Regis for 15 years and Varsity Assistant for "D" ends, defensive line, linebackers and special teams for UWEC for 18 years. He has coached track, basketball and fast pitch softball.

In 1998, Gene moved to Webster, WI, and spent 5 years as a faithful volunteer and coach. He was the head football coach there for 1 year.