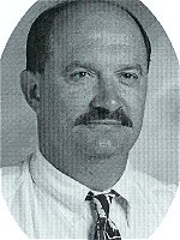 Ken was born and raised in Milwaukee. He attended Messmer High School, Washington High School and graduated from Wausau Neuman in 1965 after his parents moved to the area. While in school, Ken participated and lettered in football, basketball and track.

Following high school, Ken enlisted in the U.S. Army for three years, serving two tours in Vietnam and achieving the rank of Sgt.

Upon completion of his military service, Ken attended UW-Stevens Point on the G.I. Bill. Playing wide receiver and defensive back, he lettered four years and graduated in 1974. Ken served one season as a graduate assistant and started his professional teaching career at Waupaca High School. At Waupaca, he taught social studies and coached junior varsity and varsity football.

Coming to Ashwaubenon High School in 1977, his tenure started as a junior varsity football coach and sociology teacher for two years. Promoted to varsity and serving in the capacity of defensive coordinator, Ken maintained that status until his promotion to head coach in 1983.

In 21 years as the head coach, his teams have won outright or shared seven Bay Conference crowns and qualified for the State playoffs 11 times. The Jaguars were State Runner-ups in 1993 and 1998 and State Champs in 1996,2000 and 2001. At the completion of the 2004 season, his overall football record was 154 and 84. Ken is particularly proud of the fact that 12 of his former players are now coaching throughout the United States.

Ken was nominated for District Coach of the Year in 1990, 1993,2000,2004. He was chosen State Coach of the Year in 1996 by the Milwaukee Sentinel/Journal. He has served as assistant coach for two Shrine Bowls (1996, 2004). Ken served as District IV representative in the WFCA for seven years. He has been named Teacher of the Year in Ashwaubenon by his teaching colleagues and by the students on four occasions and was the recipient of the Golden Apple Award for teaching excellence in 2003.

The success of the Ashwaubenon football program can be attributed to a community working toward one common objective. Ken would like to thank his players and assistant coaches, on all levels, for their loyalty, dedication and hard work throughout his years at Ashwaubenon High School. A special thanks to the parents, citizens and school administration of Ashwaubenon for their patience, support and understanding.

A final thank you to the WFCA and all the great coaches around the state of Wisconsin for their "labor of love" and raising the quality of high school football. These men not only excel at coaching but provide their players with life's lessons and positive role models.