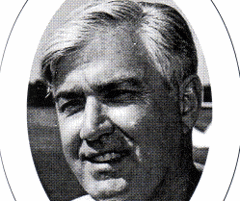 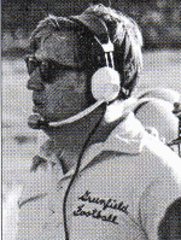 Pete was born and raised in Madison, Wisconsin, where he graduated from Central High School in 1953. While at Central he played football, basketball and baseball. He attended UW-Platteville and graduated in 1958 with a major in industrial arts. He was a three year letterman in football, played on two conference championship teams, and is proud to have played defensive end on a line that was recognized as number one in the nation in team defense by the N.A.I.A. in 1956. He also attended UW-Milwaukee and Western State in Gunnison, Colorado, and received a major in physical education.

Pete's first teaching and coaching job was in Sparta, Wisconsin. He taught industrial arts and was assistant football and assistant basketball coach. He also began the wrestling program at Sparta and was head coach for two years.

In 1960 he began his duties at Greenfield High School as woodworking teacher, Industrial Arts Department Chairman, assistant basketball coach, and assistant football coach, under Hall of Fame coach, Al Trotalli. In 1972 he was named head football coach and retired from that position in 1991. His teams were conference champions in 1976 and 1978 and finished second in the conference several times. Pete was instrumental in initiating the weight training rooms at Greenfield and putting lights on the stadium field. He was the defensive coordinator for the South Team in the 1987 Wisconsin Shrine All-Star game. He was a long-time member of the WFCA, the American Football Coaches Association, as well as a WIAA wrestling, football and basketball official and a member of the Eastern Officials Association.

Pete has received Distinguished Service Awards from the John Barth Foundation at UW-Platteville, UW-Platteville Championship Recognition Awards, WFCA Championship Awards, and 25 and 30 year Service awards from WFCA. He helped initiate the Metro Milwaukee Coaches Association, along with Hall of Fame Coach Bill Bartholomew, which provided area coaches an opportunity to exchange ideas and also provided area athletes the opportunity to attend a low-cost football clinic and participate in a touch football league.  He also coached and spoke at several football camps during his 35 year coaching career.

Pete is honored to join his high school coach, Harold "Gus" Pollock, his college coaches, Lester "Butch" Leitl and John Barth, and his UW-Platteville teammates, Neil Kohn and Larry Thurston, in the Hall of Fame.

Pete has been married to his high school sweetheart, Nancy, for 45 years, and they have two sons, Mike and Dave, who have continued their dad's interest in working with young people in their professional careers. Pete is grateful to his family for their love and understanding, to the WFCA for this humbling honor, and to his dedicated athletes and coaches for their support.