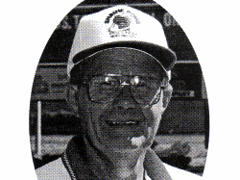 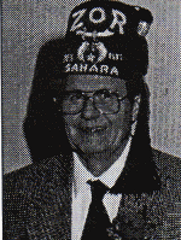 Herb Johnson was born and raised on a farm near Cambridge, Wisconsin. He graduated from Cambridge High School and attended the University of Wisconsin in Agriculture. In 1970, he and two partners started A-Z Farm Centers, Inc., in Watertown. At that same time Herb bought a farm and moved his family to Watertown. Herb was the general manager at A-Z Farm Centers, Inc., for 22 years. Herb has always been active in the farm fertilizer and agricultural chemical business. He has been on the advisory board of several companies and has been a director of the Wisconsin Fertilizer and Chemical board. He has been in the agriculture business all his life.

Herb's involvement in youth sports began when his son and daughter started summer little league baseball.  Having been a high school athlete himself, it was natural for him to answer the need for a coach.

In 1976 Herb assisted a fellow Shriner at the training camp for the High School All Star North-South football game. This was a new venture between the Zor Shrine and the Wisconsin Football Coaches Association. The next year he became the South representative for the Shrine organization.

Each year he adopts 44 players and 6 coaches at the training camp. His job is to assist the coaches and players in any way he can, to solve problems that arise, and to make sure that all the rules are met for the student athletes.  The south team camp is at the University of Wisconsin-Whitewater campus, and Bob Berezowitz and his staff have been an important part of the success of this program.

For the players, this time at camp is a preview of their next four years of college life. That, along with concentration for the game, getting to know 43 other All-Stars and the hottest days of the summer makes for a lifetime of memories. Herb is proud to be a part of all this.

Seventeen years ago, Herb, Athletic Director Willie Myer, Head Football Coach Bob Berezowitz of Whitewater University, Del Deering and Joe Kinzer of Zor Shrine, initiated the University of Wisconsin-Whitewater Shrine Game. Herb has served as the General Chairman of that game, and so far the game has generated $120,000. for the Shrine Hospitals for Crippled Children. Each year the King or Queen for that game is a young person just starting treatment at a Shrine Hospital.

In 1997 Herb was honored with the Dave McClain Distinguished Service Award. The award was special since he was just doing something he really enjoyed doing. The Hall of Fame honor goes over the top for Herb.