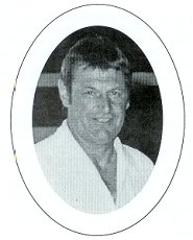 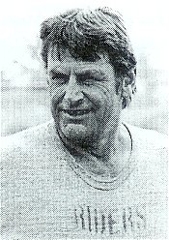 MONTE CHARLES
Inducted into the Hall of Fame in 2006

Monte was born and grew up in Vicksburg, Michigan. At Vicksburg High School he earned 14 letters participating in football, basketball, and baseball. He was an All-Conference fullback. He is a member of the Vicksburg High School Hall of Fame. Monte was an alumnus of Hillsdale College in Michigan where he lettered in football track and baseball. In college he played both fullback and linebacker. He played on a winning team all four years of college. Named to the All-Michigan Intercollegiate Athletic Association as a linebacker.  Hillsdale was the only Michigan small college team to participate in a bowl game. Seven of his Hillsdale teammates were drafted by NFL teams. Upon graduation Monte was drafted as a fullback by the Green Bay Packers in 1950 but was released six weeks before the start of the 1951 season.  Next he spent three years with the semi-pro team, the Detroit Tars.

All three teams Monte coached in the WSUC led the nation and NAIA Division I in passing and total offense. Several of Monte's players at all three schools became Little All-Americans and are now members of their respective school's athletic Halls of Fame. It was at UW-Stevens Point where he was dubbed and shall always be remembered by his players and fans as the "Ringmaster of the Aerial Circus" for his proficient and exciting passing games.