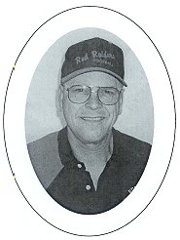 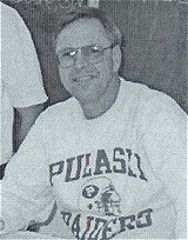 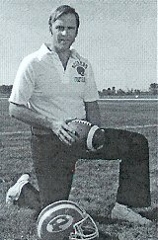 Born in 1946, Rock was the third of four sons of Lloyd and Johanna Mannigel. Growing up in the shadow of Kingsford's Flivver Field in Michigan's Upper Peninsula, football was the obvious sport of choice. As a youngster, he was the only one who showed up with a clip boad for the neighborhood pick-up game. He proudly played on the undefeated UP Championship Team of 1963.

Mannigel graduated from Northern Michigan University in 1969 with a degree in Industrial Arts Education. He signed a contract to teach and to coach football for Pulaski High School in Pulaski, Wisconsin, During the next 33 years, Rock Mannigel's name became synonymous with Pulaski High School and the Red Raider Football program.

Rock's first year and the last 23 were spent as a varsity assistant. The second through tenth years he was the Red Raider head coach, but he felt the added responsibilities of head coaching took away from what be really wanted to do - coach! He believed that being a head coach was the greatest education he could have received to prepare him to be a better assistant. In 2000, his final season. he was honored as District II and WFCA State Assistant Coach of the Year.

During Coach Mannigel's tenure with the Pulaski football program, the Raiders won four Bay Conference championships, they were 9-6 in Division II playoff games and in 1980 finished as state runner-up to Whitewater. He impacted several generations of high quality football players and well-rounded young men who learned the value of hard work, discipline, humor and sportsmanship.

Rock was a charter member of the WFCA. Rock is very grateful to his family for sharing the rigors of 33 years of coaching. A special salute goes to his head coaches, Fritz Kestly, Byron Buelow and Phil Morgan, who extended Rock's career and made it so much fun. Rock would like to thank the Pulaski community, coaches, players and parents, as well as his former teammates and friends who all played an integral part in his coaching career. He especially would like to thank the WFCA for awarding him this humbling honor.