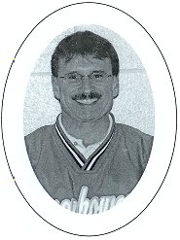 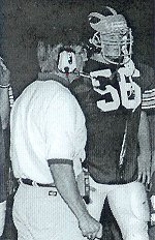 Jeff was born to Francis and Barbara Setz in Waterloo on January 23, 1951. He was raised in this small city in Wisconsin and graduated from Waterloo High School in 1969. Setz was a two-way player for the Pirates football team, playing guard on offense and middle linebacker on defense. Jeff led the team in tackles during his senior year.

Setz continued on with his education by attending the University of Wisconsin-Platteville. He majored in math­ematics and minored in physical education. Jeff graduated with honors receiving a Bachelor of Science Degree in Secondary Education.

Setz was hired as a mathematics teacher at New Berlin Eisenhower High School in 1973. He started coaching football in the middle school football program. Jeff began his high school coaching career in 1976 working for five seasons with the Freshmen and Junior Varsity teams. In 1981, Setz was moved to the Varsity where he coached the offensive linemen. Jeff was promoted to Defensive Coordinator in 1983. He remained in those positions for seven years, and during this time, Eisenhower reached the WIAA State Finals at Camp Randall in Division II twice (1986 and 1989).

In 1991, Setz was named as the Head Football Coach at Eisenhower. During his fourteen years as head coach, Jeff led his teams to back-to-back WIAA State Championships in Division III (1995 and 1996) and back-to-back Woodland Conference Titles (2002 and 2003). He compiled a record of 100 wins and 48 losses and his teams qualified for the WIAA playoffs in eleven out of fourteen years.

Setz coached softball at IKE and as the Head Coach has won over 200 games. He also coached boys and girls basketball as an assistant, winning over 350 games.

Now that he looks back on his coaching experience, Jeff thinks he was pretty lucky to have been supported by such a great family, dedicated assistant coaches and talented student athletes. Setz ended up with a congratulatory e-mail from one of his former players stating the following: "I thank you for teaching me in football things that have helped me as a teacher, coach, husband, and father." Jeff believes that is what coaching football players is all about.