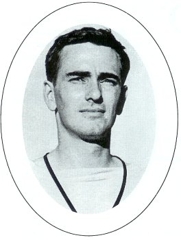 Duaine was born on July 9, 1924, in Wisconsin Dells, the son of Kenneth and Priscilla Counsell. His father was also his high school coach.

Upon graduating, he entered the U.S. Army during World War II and received two presidential citations, a purple heart, a bronze star, and the good conduct medal. After the war he attended UW-Stevens Point from 1946-49 playing football under Hale Quandt. Duaine's high school career started as head football coach at Wisconsin Dells High from 1949-55 and at West Allis Central in 1956. He won the conference championship at the Dells in 1951 and was named Coach of the Year. His record in high school was 46-15. He also coached basketball, track and baseball.

He received his Masters Degree in Education in 1956 from UW-Madison and replaced Hale Quandt as head football coach in 1957 at Stevens Point. He coached football from 1957­65, 1967-68 with a conference championship in 1961. His record was 56-33-4. He also coached baseball from 1961-64 winning two conference championships. His record was 40-14. He was also assistant basketball coach under Hale Quandt.

During the off season he officiated both football and basketball. He worked nine state basketball tournaments during his officiating years.