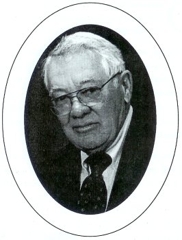 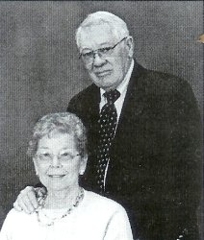 Owen Evans was born in Racine, Wisconsin, on June 30, 1927, to William and Anne Evans. He graduated from Washington Park High School in 1945. He lettered in football, basketball, and track under the guidance of his coach, Clark VanGalder.

Owen entered the United States Navy in August of 1945. He was able to continue his football career a year later at LaCrosse State Teachers' College. Clark VanGalder was again his coach as he lettered three years and was elected to the All Confeence Team for both his junior and senior years.

Owen is a member of the Washington Park High School Hall of Fame, as well as a member of the University of Wisconsin­LaCrosse Wall of Fame. He was also the president of Dubuque Optimist Club and state secretary-treasurer of the Iowa Optimist district. He served as commissioner for both the Racine Recreational Department and the City Plan Commission.

Owen is a very active member of Covenant Presbyterian Church where he was baptized, confirmed, and, presently acting as ruling elder and usher. He is also well known and respected in the Racine area, as he continues to show his support at many of the high school sporting events.

Owen treasures and is thankful for his family life. It is with great pride and gratitude that Owen accepts this honor from the Wisconsin Football Coaches Association.