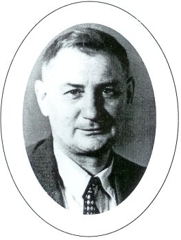 Earle w. Foster was born at the family farm home three miles north of Roberts, Wisconsin, on May 6th, 1895. He was the eldest of seven children.

Enrolling at Roberts High School in his early teens he did well scholastically and found the school athletic program to be of consuming interest. Although never heavier than 130 pounds, he was a mainstay on the Roberts High School athletic teams in all sports offered: football, baseball and track. His scholastic and athletic aptitudes, his desire to be with and to help people, and his love for competitive sports created a strong desire to engage in the field which would be his life's great interest, teaching and coaching. To bring about that result he enrolled at River Falls State College in the fall of 1913.

After graduation Earle taught high school mathematics and physics and coached all sports at Clear Lake, South Dakota; Darlington, Wisconsin and Monticello, Wisconsin. At Monticello he met Zoe Hancock who lived there and on June 20, 1917, they were married. In the spring of 1918 he entered the armed service. Serving in the 89th artillery division during World War I, he spent 11.5 months in France, much of that time in combat .

Port Washington was to be his home for the remainder of his life.  Earle was hired as a physical education and mathematics teacher. Soon he won his way into the hearts of his students who easily saw through the gruff exterior he frequently simulated. He was affectionately nicknamed "Pop" early in his teaching career here and thereafter was known by no other name.

With the great enthusiasm and energy which characterized him "Pop" plunged into the high school program, instituting cross country as an interscholastic sport and leading that first team to a state championship. Until this fall "Pop" coached cross country every year for the past 29 years, and together with Sam DeMerit produced many great track teams and assisted in producing many outstanding young men. His interest in his boys and in the work assigned him extended far beyond the call of duty.