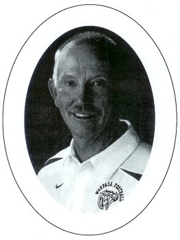 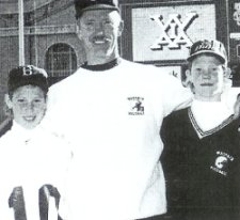 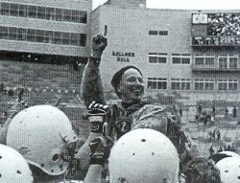 John was born on November 17th, 1952, and raised in Oconto, Wisconsin. His competitive nature was fueled by participating in athletics. He won letters in football, basketball, and baseball as a Blue Devil at Oconto High School and graduated in 1971.

Koronkiewicz continued his education and athletic career at the University of Wisconsin-Oshkosh. He played four years of football for the Titans, winning three letters, and was part of their 1972 championship team. He graduated from Oshkosh with a Bachelor of Science Degree in Broadfield Social Studies and began teaching in Waupaca in 1976.    He has taught American Government, World History, and U.S. History for over thirty years. He views teaching as a personally satisfying and honorable profession. In 1992 John earned his Master's Degree in Athletic Administration from Idaho State University.

Koronkiewicz began his coaching career in Waupaca by serving as an assistant in football, basketball, and base­ball for eight years. He gave up basketball to focus on his two passions. From humble beginnings the Comets quietly developed into a solid football program. Over a twenty-one year stretch Waupaca won seventeen Conference Championships, including a remarkable string of thirteen in a row.

They have participated in the W.I.A.A. playoffs 20 times, played in three title games at Camp Randall, and were Division 3 State Champions in 2006. John is proof that if you love the game, care about your players, work hard, and surround yourself with good people that anything can happen. Even the loftiest of dreams can come true.

Koronkiewicz has received numerous coaching awards. He was named WFCA District Coach of the Year seven times, Appleton Post Crescent    Coach of the Year twice, and WSAW Channel 7 Coach of the Year as it:; well. John was part of the WFCA All-Star Coaching Staff in 1996. He    will finish his career in elite company with over 200 victories.

He is thankful for the life he has been given and regards his selection to the Wisconsin Football Coaches Hall of Fame as humbling, rewarding, and gratifying.

Favorite sayings include: Be True To Your School - Every Down, Every Play, Attitude, Character, Enthusiasm, and Team - From Many Comes the Power of One.